After running an incredible campaign, educating hundreds of thousands of Arkansans about the libertarian philosophy and the LPAR, our esteemed gubernatorial candidate Frank Gilbert earned 16,217 votes on Tuesday.

I hope you will help me congratulate Frank on a well-fought race. His determination, ability to truly connect with voters and his charming attitude were a breath of fresh air this election season. I firmly believe that our members could not have nominated a better candidate for Governor.

Now, what do our candidates’ vote totals mean?

Frank’s record-breaking vote totals (1.92%) show a marked increase over votes for Gary Johnson in 2012 (1.52%) and blew away the Barr/Root 2008 results (0.44%). Frank succeeded in winning more hearts and votes than any top-of-the-ticket candidate in AR election history in a year with less than 50% voter turnout. Congratulations, and thank you, Frank!

Unfortunately, we were not able to reach the state-mandated percentage requirement (3%) to retain our ballot access for 2016. This means that we will again have to raise tens of thousands of dollars and re-petition in order to run Libertarian candidates in 2016.

While this is not the outcome we were hoping for, I hope you will join me in celebrating the many Arkansas Libertarian victories in 2014.

*Arkansans elected THREE Libertarians this year! Congratulations to Mayor-elect Bobby Tullis of Mineral Springs, to Constable-elect Jacob Faught in Gentry and to Alderman Casey Copeland of Prairie Grove for his third consecutive win.

*Looking only at our four Congressional races, we can see that a minimum of 65,712 unique voters cast ballots for Libertarian candidates in this state. Compare this to 37,082 votes cast for our four Congressional candidates in 2012, and you can see a 56% increase in the number of Libertarian voters in this state, even with lower voter turnout this year.

*Every Arkansan had at least nine Libertarian options on their ballot this year. Arkansas voters were among the luckiest in the nation with such a high number of Libertarians on each ballot.

*The LPAR was the only political party to have a candidate in every single debate hosted by AETN. This opportunity allowed our candidates to reach new voters and educate Arkansans about the libertarian philosophy throughout these repeatedly-televised debates.

*From 2012-2013, the LPAR’s membership increased by an extraordinary 65.38%. We also saw a 23.26% membership growth from 2013-2014. Lifetime memberships in the LPAR will see an increase of 300% by the end of this year. Arkansans with memberships in the National LP grew by 17.98% this year as well. Our social media pages are being followed by more people than ever. Even our facebook page “likes” have almost doubled since the time of the 2012 election. While these are not election results, we count this as yet another victory in our efforts to move Arkansas towards freedom.

If you would like a breakdown of all Libertarian candidates’ races, you can view our election results page HERE. 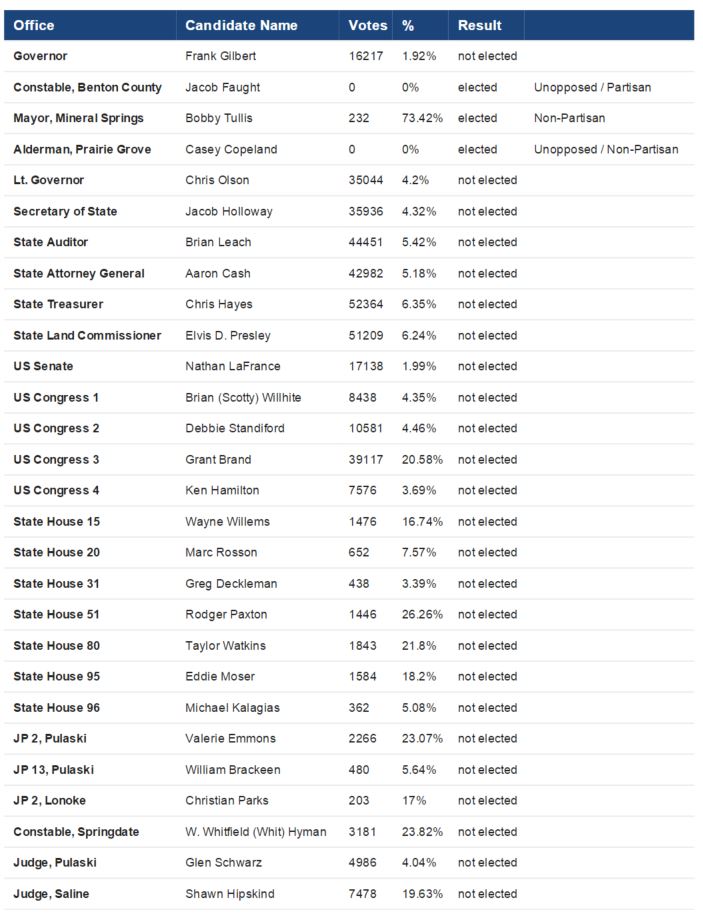 I hope that you will join us in celebrating these victories. We have a long road ahead of us to put Libertarians on the ballot in 2016, and we need YOUR help to make that happen. If you haven’t already, please consider joining the LPAR as a state party member. Party memberships start at only $10/year and those funds help support the daily operations of the LPAR. We also greatly appreciate our monthly Torch Club Sustaining Members, whose monthly contributions help us better plan for the future. To thank our monthly donors, we offer LPAR exclusive merchandise, and it’s not too late to get on our upcoming shipment of gratitude gifts.

We thank you for your support, your votes and your help this election season. We want to continue offering Arkansans more freedom by putting Libertarians on the ballot. Will you help us?
Live FREE!