Reprinted from The Libertarian Republican blog with permission from Eric Dondero. 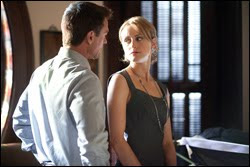 On Sunday I joined a group of 8 Libertarians from the Libertarian Party of Arkansas to view Atlas Shrugged. We went to a megaplex in west Little Rock after lunch at the Outback. Rodger Paxson, Chairman of the LPAR and his lovely wife organized the event.

There have been many reviews of Atlas in the last few days. Predictably, to a man (and woman) leftists like Roger Eber and Maureen Dowd have hammered the movie. Righty reviewers are all over the map. P.J. O’Rourke wasn’t impressed. But Ed Morrisey of HotAir.com, and Matt Welch of Reason loved it.

to my surprise, Atlas Shrugged Part I turned into an intriguing, stylish film that did not water down the Randian message in the least. In fact, the film format seems to free the characters in some sense from the limitations of Rand’s prose and give more clarity and purpose to the story, while keeping its message firmly at the film’s center… It’s surprisingly well-paced, surprisingly intelligent, surprisingly well-acted, and surprisingly entertaining.

Ed pegged it. I couldn’t agree any more.

It’s perhaps the greatest movie ever made. Without doubt it’s one of the top Pro-Freedom themed movies ever.

I put it right up there with Saving Private Ryan, The Killing Fields, and Schindler’s List.

The characters were superb. The casting was right on. Of course, Henry Reardon (Grant Bowler) and Dagney Taggart (Taylor Schilling) played their roles to perfection. Like Ed says in his review, the film was amazingly stylish. And the story stayed meticulously in line with the novel.

It does get a little Science Fiction-ey in parts. The John Galt character seems overly dark.

If I had one serious criticism, its that the movie is very fast paced, and skips around a great deal. I can see where someone not familiar with the story might get a little confused, and maybe even frustrated. It really is made for at least 2 to 3 viewings.

Our movie theater was about 60% full for the matinee show. There was a bit of a standing ovation at the end from attendees.

Certainly, the row of us Libertarians in the back stood up and cheered.

It really is that good. Go see it, once, twice or even more times. And bring a friend or two. After the movie give them a copy of Atlas, along with a Republican Liberty Caucus or Libertarian Party brochure.